In studying and creating nanostructures with novel functionality, optical systems that leverage the new effects are required to find successful application. With compactness and feasibility in mind, our group has demonstrated the incorporation of the near-field and diffractive effects of novel nanostructures as improvements of traditional optical systems. 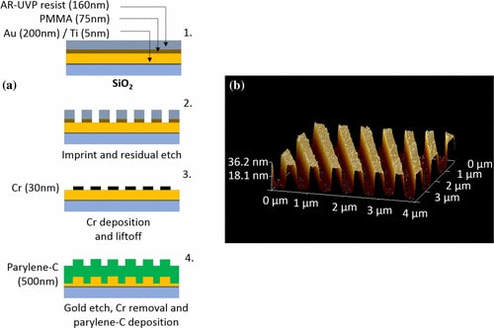 Thermal infrared detectors of long wave infrared radiation (LWIR) in the in the 8-14 micron band allow a wide variety of otherwise invisible physical phenomena to become observable, including the acquisition of characteristic chemical vibrational spectra for scientific and medical analysis, optical data transfer and telecommunications, and thermal imaging for military and civil service. Temperature changes in electrical voltage or current induced by absorbed infrared light have also been used for thermal IR detection, and crucially, are the basis for uncooled IR detectors, bolometers and focal plane arrays. However, a drawback for thermal sensors is the high thermal conductance of silicon upon the read-out integrated circuit (ROIC) that limits the maximum temperature contrast achievable. Instead of an electrical readout mechanism, we developed a surface plasmon resonance (SPR) sensor loaded with a thermo-optic polymer sensitive to LWIR absorption for readout in the visible optical domain. Thermal radiation induced refractive index changes in the polymer layer shift the SPR resonance and are observed as reflectance changes in a visible imaging system. Our device is based upon a nanoimprinted subwavelength gold grating to diffractively couple near-normal incident angles of visible spectrum light into a propagating SPR mode. A conformal polymeric thin film absorptive in the thermal imaging band is deposited on the grating, and imaged in reflection. Such a sensor provides a simple and compact imaging system in the LWIR using off-the shelf parts readily available for visible imaging systems.

Optical Fourier Transform (FT) spectroscopy offers exceptional resolution and signal to noise ratio with high specificity for the analysis of chemical spectral signatures. Stationary FT spectrometers measure this spectra without moving parts and have relied on the availability of detector arrays to stabilize and compact the bulky topology of the traditional mirror drive interferometers. Despite this advantage, stationary FT spectrometers measure single dimensional interference patterns, and as such, have resolving powers that are fundamentally limited by the length of a detector array. By introducing spectral dispersion into the stationary interferometric signal pattern, our spectrometer increases the resolving power of the highly compact and mechanically stable stationary Fourier transform spectrometers. In particular, we leverage the immense growth in pixel counts of two-dimensional imaging detectors by the conversion of the standard single dimensional interferogram into a two-dimensional spectral interferogram processed in spatial channels, reducing the bandwidth sampling constraints on resolution. Imaging detectors and focal plane arrays that are now widely available can now be designed around the highly compact format of stationary Fourier transform spectroscopy without sacrificing resolution or SNR.

Two-photon microscopy has had an enormous influence on animal studies of in vivo brain activity providing a tool for high-resolution imaging in live cortical tissue. Yet, the majority of 2-photon imaging studies, as of today, have focused on the top ~500 μm of the cerebral cortex due to limited penetration of light into biological tissues. Cerebral neurons, however, are wired in circuits spanning the entire cortical depth (~ 1 mm in mice), and sampling of activity throughout this depth would be required for reconstruction of circuit dynamics. Therefore, increasing the in vivo penetration depth of microscopic imaging is at the heart of our research. We demonstrate that the degree of freedom introduced by non-degenerate 2-photon excitation (ND-2PE), using two independently controlled pulsed laser sources of different photon energies, may provide a number of advantages over the conventional methods promising deeper penetration with higher efficiency of excitation in a scattering medium. The presence of two laser beams allows:This technique has been applied to live mice and the neuron images in mice brain showed the signal enhancement with ND-2PE. 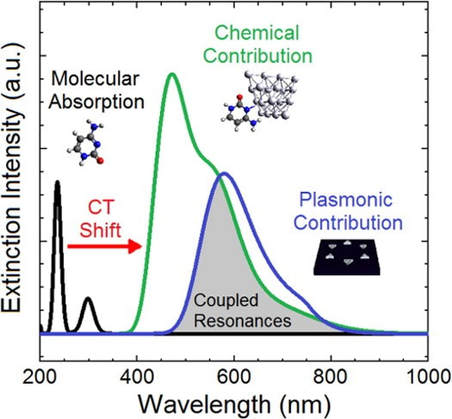 Raman spectroscopy is a technique in which the inelastic scattering of photons interacting with matter is used to determine the molecular structure of the material or analyte of interest. The change in energy of the photons and the magnitude of the scattering intensity correspond to the molecular geometry and yield unique information about the subject. Metal structures enhancement the Raman signal by exploiting two effects: (i) optical field localization, termed electromagnetic enhancement, and (ii) chemical enhancement effect due to charge transport between metal and the molecule. Chemical enhancement is a product of several effects, including the excitation of the molecular resonance, the charge-transfer effect, and the static polarizability effect, leading to Raman signal enhancement when the excitation energy is in resonance with the electronic transitions that are generated when electrons from the molecular orbitals of the molecule interact with the orbitals of the nanoscale metallic devices. We have studied this effect to understand the repeated discrepancies regarding the surface-enhanced Raman signal of DNA bases, and using cytosine and guanine as examples, have experimentally measured the charge-transfer (CT) effect that leads to resonance Raman scattering (RRS). Our studies have demonstrated that DNA base SERS system's intensities are dependent on the excitation energy and is caused by the CT resonant band that is created by the transfer of electrons between the metal and nucleic acid. Critically, the effect is chemically selective and can be utilized to provide additional degrees of freedom to obtain information about the subjects of interest, such as DNA. 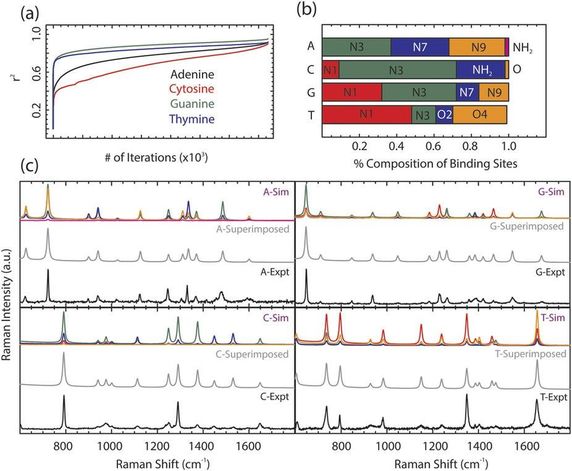 Our studies into chemical enhancement and the charge transfer effect have shown that the Raman spectrum is sensitive to the way in which molecules bind to the surface of materials. Namely, the chemical interaction is dependent on the molecular orientation of the DNA strand with respect to the plasmonic surface, which is revealed in the spectral features of the Raman signature. We have demonstrated that we can extract the surface binding properties of nucleic acids to silver films by correlating TD-DFT calculations with experimental measurements. We developed the simulated Raman correlation spectroscopy (SRCS) process, an algorithm that detects the approximate binding orientations of nucleic acids with respect to silver by optimizing the correlation coefficient between weighted simulated Raman calculations and the experimental Raman spectra. With this research, we confirmed that specific atoms within nucleic acids preferentially bind to the surface of plasmonic materials which can be used in future research when measuring the Raman signatures of DNA functionalized to nanoparticles.

The resonance of charge density oscillations on metal surfaces known as surface plasmons enable optical coupling to highly localized modes. Through surface patterning and functionalization, novel structures are engineered to be highly sensitive to refractive index changes in the near-field and drive otherwise weak optical processes such as Raman scattering. Our group studies both propagating and localized surface plasmon modes and their applications to biological sensing, imaging techniques, and improved optical communications.
Powered by